Nonprofit Boards and the Dysfunctions of Team

Nonprofit Boards and the Dysfunction of Team

Nonprofit Board members are unprepared to govern.  That’s the finding of the 2015 Survey on Board of Directors of Nonprofit Organizations, a study released in April jointly conducted by Guidestar, BoardSource, and the Stanford Business School.

The survey found that 48% of board members do not believe their fellow board members are sufficiently engaged. They further believe that 47% of their peers do not have enough of an understanding of the role and responsibilities of a board member to be effective.

In conclusion, the study argues that “the skills, resources, and experiences of directors are not sufficient to meet the needs of most nonprofit organizations.”

Some of the study’s key data points about the organizations represented by the individuals participating in the survey include: 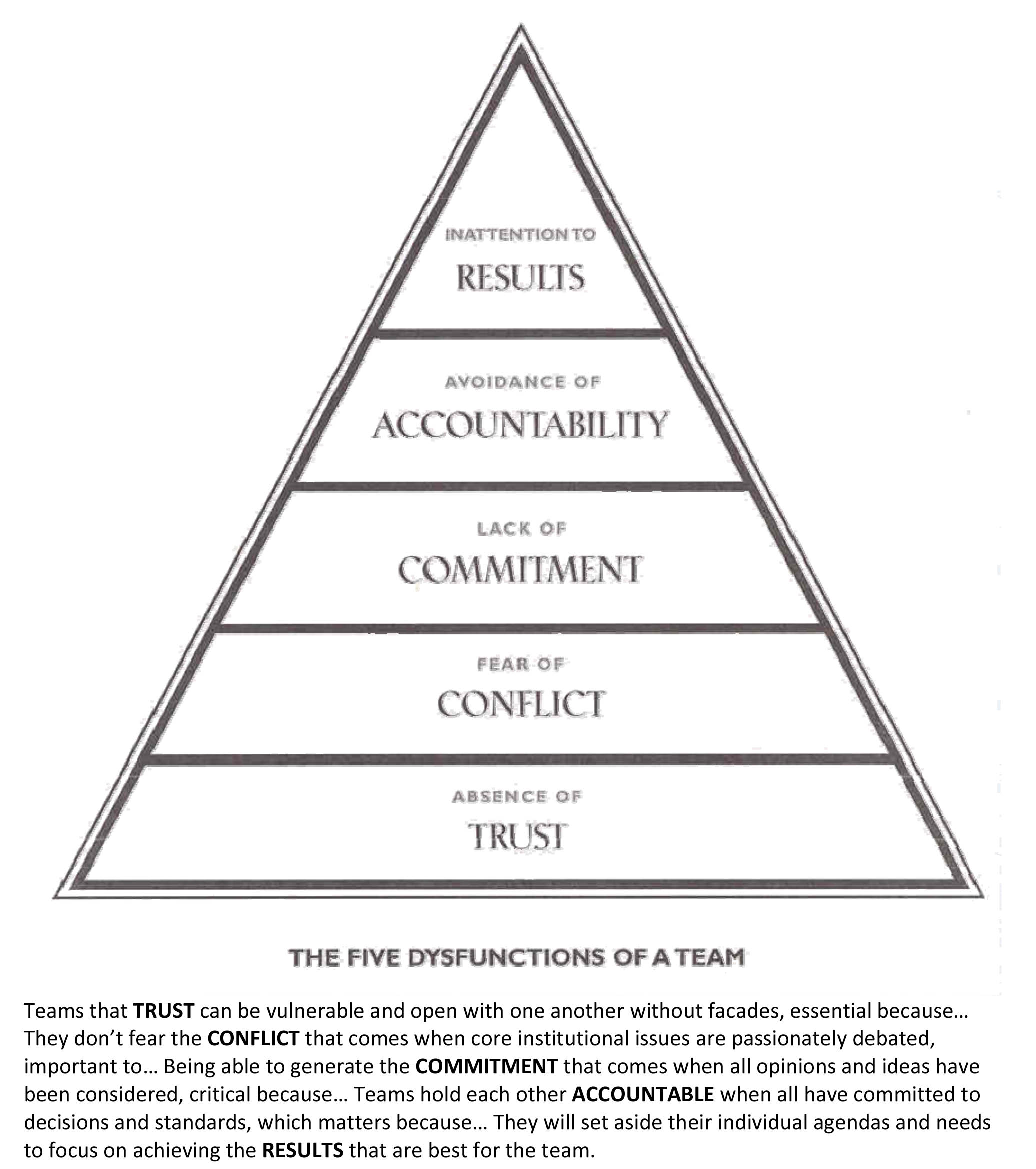 The study offers suggestions such as making sure the mission is clear and that the board’s goals are explicit and mission-aligned. The most helpful recommendations the study makes are to exercise selectivity in board recruitment, to clearly define board roles and responsibilities, to clearly define board processes, and for the board to conduct an annual evaluation of itself and each member’s leadership contributions. The study, like so many others, also recommends that the board hold the Executive Director accountable for the organization’s objectives.

In the The Five Dysfunctions of Team Patrick Lencioni identifies five failures of teams.  Each of the early failures or foundational failures of the team lead to later failures.  The failures of process and, ultimately, of outcome, are—according to Lencioni—the last failures in a line of breakdowns that begin with an absence of trust and a fear of conflict. The study’s recommendations, it seems to me, fall primarily into the areas of concern that we might label as failures of outcome and process.

From my experience of working with boards of directors, I would agree that these are indeed common board dysfunctions and that these suggestions from the study are helpful.  However, I would encourage those working to make boards more successful to look earlier along in the team process, to view failures of process and outcome, like Lencioni, as outcomes of earlier downfalls: the inability of boards to courageously—not only tolerate—but also instigate and encourage, constructive conflict.

Far too many groups—not just boards of directors—are completely conflict avoidant, fearful that having a discussion in which people have different points of view will splinter a group.  In this way, questions don’t surface, elephants in the room are ignored, risks aren’t identified, great ideas don’t emerge, and group think prevails. As a result, Lencioni argues, group commitment wanes, leading to the later collapse of process and failure of outcome.

If we see the failures of boards in this way, our list of remedies is different.  Instead of proposing clear board roles, holding Executive Directors accountable, and recommending board evaluations—not new recommendations and not recommendations that haven’t been implemented in the past—for remedies, we might propose, developing our board members’ and leaders’ dialogue and group process skills so that richer, more meaningful discussions, trust, conflict, and commitment might be built.

What remedies would we pursue if we were to view the breakdowns in our systems of nonprofit governance as failures of the early stages of team building rather than as the [later] results of process and outcomes failures? This might look like us as nonprofit leaders equipping our board members with an entirely different set of skills.  In addition to teaching them about the ten basic responsibilities of nonprofit board members and about how to evaluate themselves and their executive directors, it might also mean that we teach and encourage trainings like Crucial Conversations and Crucial Accountability offered by Vital Smarts or the wisdom of Fierce Conversations written by Susan Scott or perhaps working on self as advocated by Edwin Freeman in Failure of Nerve: Leadership in the Age of the Quick Fix.

I imagine many would say that investing to create this kind of engaged leader is beyond the scope and capability of the average nonprofit.  No doubt, they’d be right.  What the average nonprofit needs is to recruit this kind of pre-trained board leader.  Yet, how many ready-made leaders in typical communities exist?  If they were abundant, we’d have better boards, wouldn’t we?

One way those that really want to help, those who want to strengthen the capacity of nonprofits such as  community foundations, United Ways, chambers of commerce, community leadership programs, and other social enterprise investors could significantly impact communities is through this type of board/leadership development and through investment in community leadership programs which produce these type of rare leaders, leaders that are comfortable with conflict, who have the courage to engage in difficult and sometimes contentious conversations to ensure that all relevant solutions are considered and explored.

Our Blog: Davis on Development RSS